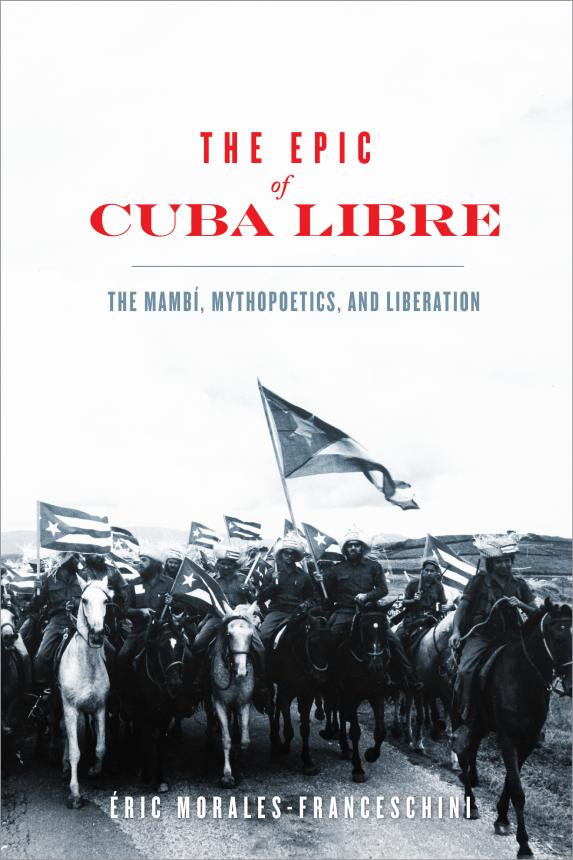 His book, The Epic of Cuba Libre: The Mambí, Mythopoetics, and Liberation (University of Virginia Press, 2022), reads closely for the tropes, symbols, and mythoi called on to narrate and aesthetically render the story of Cuba Libre and its epic hero the mambí.  Drawing on literature, historiography, cinema, and monuments, the study teases out the ways in which such texts promiscuously or precariously embody an epic in which emancipatory desire, populist festivity, democratic plentitude, and tragic fallibility inflect the Cuban political imaginary.

Other scholarly works include articles on Afro-Caribbean figurations of the abject, liberation theology, the Young Lords in collective memory, atrocity and poetic witness, the iconography of José Martí in Cuban cinema, Cuba's "imperfect cinema," and comical inflections of the epic genre in the animated series Elpidio Valdés--published in The Journal of Postcolonial Writing, Global South Studies, Centro, Comparative Literature, Jump Cut, Age of Revolutions, and Small Axe.

His newest scholarly project, Tenacious Beauty: Theses on Militancy as an Aesthetic, looks to militancy not in terms of idealistic folly or violent menace inasmuch as eros, beauty, and the sublime.  With an eye for the embodied rhetoric, iconography, and aesthetic "tactics" of the Young Lords, Black Panthers and Cuban barbudos, it asks what about militancy seduces and empowers, not just scandalizes or terrifies.  In doing so, it puts forth a new critical vocabulary for understanding militancy as an aesthetic, namely the begetting body, decolonial love, sovereign performativity, the salvific sublime, and restorative mimicry.  This he puts in dialogue, thereafter, with militancy as a contemporary "alt-right" phenomenon.

Professor Morales-Franceschini is also a poet, with an affinity for prose and testimonial poetry.  He is the author of the chapbook Autopsy of a Fall (Newfound, 2021), selected by Marcelo Hernandez Castillo for the 2020 Gloria Anzaldúa Poetry Prize, and of the book-length collection, Syndrome, a historico-lyrical exegesis and "counter-diagnosis" of the (de)coloniality of power in Puerto Rican history and Boricua consciousness (Finalist for the 2022 Hudson Poetry Prize).  His poems have appeared in Moko, Somos en escrito, Chiricú, Witness, Dryland, Acentos Review, Kweli, Berkeley Poetry Review, Bodega, Matter, Muzzle, sx salon and reviews at Newfound, Tropics of Meta, The Rumpus, Boston Review, and AGNI.

A James B. Duke fellow at Duke University and Chancellor’s fellow at UC Berkeley, Professor Morales-Franceschini has been the recipient of the Andrew Mellon Fellowship in Humanistic Studies (awarded by the Woodrow Wilson Foundation), the Ford Foundation's Postdoctoral Fellowship, and the UGA Willson Center for the Humanities and Art's Research Fellowship.  He regularly teaches courses in Latinx studies and multicultural American literature and on themes such as "Literature and Utopia," "The Epic of Liberation," and "Critical Paradigms in Latin American and Caribbean Thought."

Ph.D.  Rhetoric and Critical Theory, University of California at Berkeley

"West Side Story and the Tragedy of Progressive Hollywood." Boston Review. March 7, 2022.

"Poetry and the Grotesque: Daniel Borzutzky Bedtime Stories for the End of the World." AGNI. November 29, 2021.

"Catastrophe and Utopia: Kim Stanley Robinson's Ministry for the Future." Tropics of Meta: Historiography for the Masses. February 12, 2021.